Sorry, the offer you're looking for is no longer available. Try other great offers below!

Bathrooms.com is a UK retailer of bathroom goods, such as baths, sinks and toilets, established in 2...

With over 65 stores across the UK, we have our finger on the pulse of streetwear fashion. From high-... 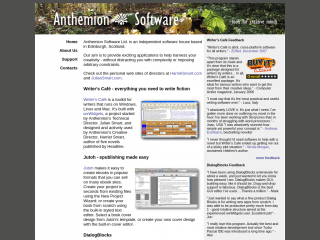 Anthemion Software Ltd. was founded by Julian and Harriet Smart in September, 1996 and became a registered company in April 2003. We are based in Berwick-upon-Tweed and Edinburgh.
We create and market fun, effective software to help people write fiction. Our philosophy is to produce non-scary applications that genuinely break through block, in contrast to those of the write-by-numbers genre which are often more confusing than helpful.

Harriet Smart is creative director of Anthemion Software. She has written fifteen novels, and is currently working on a historical mystery series set in the fictional town of Northminster. She holds an MA in TV screenwriting.